I’ve been expecting this for some time – I just didn’t think it would come quite so quickly, even though it is desperately overdue.

Pope Francis: Catholic Church should apologize to gay people and others it has marginalized 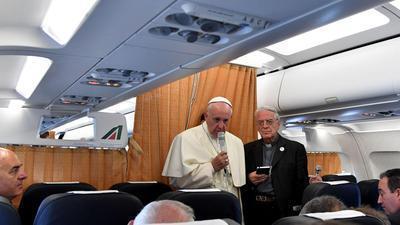 Pope Francis says gays — and all the other people the church has marginalized, such as the poor and the exploited — deserve an apology.Francis was asked Sunday en route home from Armenia if he agreed with one of his top advisors, German Cardinal Reinhard Marx, who told a conference in Dublin in the days after the deadly Orlando gay club attack that the church owes an apology to gays for having marginalized them.

Francis responded with a variation of his famous “Who am I to judge?” comment and a repetition of church teaching that gays must not be discriminated against but treated with respect.

He said some politicized behaviors of the homosexual community can be condemned for being “a bit offensive for others.” But he said: “Someone who has this condition, who has good will and is searching for God, who are we to judge?”

What grounds did I have for expecting at all?

Simply because there have now been a series of papal apologies to a wide range of groups previously attacked or persecuted by the Catholic authorities. Pope Benedict XVI apologised to Muslims for the Crusades, Pope Francis apologised  to the indigenous people of South America for “ideological colonialism” (but not the the ideological colonialism in sexual and gender norms), and more recently to Protestants. LGBT people were at the back of the queue, but their turn had to come eventually. There are other examples too, which I do not now have time to enumerate.

As others have noted, a simple apology for “harm” is not enough, on its own. There needs to be an admission of how the harm was done, and how it is inextricably linked to core sexual doctrine. We also know from the theology of the sacrament of reconciliation, that simple confessing of sins is not enough to merit full forgiveness, unless it is accompanied by appropriate restitution for the harm done. In this context, restitution to those individuals already harmed is impossible – but restitution to the community would be possible, if it included an admission that the harm is a direct result of grievously disordered sexual doctrines, which need urgent reconsideration.

Now however, is not the time to carp. Let us first, offer profound thanks that Pope Francis has gone where none of his predecessors could – he’s asked of the entire Catholic community, “Who are WE to judge?”

This alone will enrage his many detractors on the orthotoxic Catholic right to height not previously seen. Let us for now, recognise his remarkable first step – and postpone for a later date, consideration in more depth, of what is surely required next.

(Cross-posted from Queering the Church. The opinions expressed in this post are my own, and are not necessarily those of Quest as an organisation).